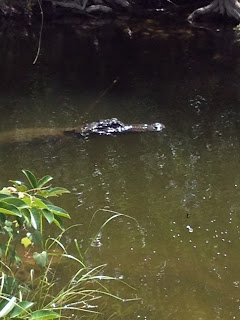 The other day we visited the Everglades which is a swamp full of wildlife. While there we went on a 3 hour tram tour. During that tram ride we saw many different species of wildlife, including alligators vultures and many birds. We also saw crows picking food out of a basket on a bike. While there we saw the skeleton of a 12 foot alligator. The guide said that most of the time people take teeth out of the skull and he said that he was amazed the head was still there, normally people take them within 2 or 3 days of the alligator dying. He also said that the number of mammals in the park has dropped 90% due to boa constrictors. People had brought them to Florida as pets and then they grew too big or got too expensive to keep so they released them into the wild.
Posted by Unknown at 2:39 PM